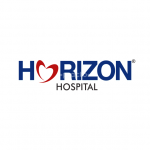 Horizon Hospital is a NABH Accredited Super Specialty Tertiary Care Hospital situated in the heart of Thane city. Founded and driven by the motto of“Right Care. Right Here. Right Now.”,Horizon Hospital holds pride in being able to deliver quality services to their patients.We are a Centre for Critical Care Services and are manned with a highly qualified staff that includes a Critical Care Consultant, emergency medicine trained doctors & qualified & experienced nurses. We do understand that critical care is essential during emergencies. Following the same notion, we have an emergency room that is available round the clock to provide medical attention to all minor and major cases that demand immediate treatment.We have state-of-art equipments like Puritan Bennett Ventilators, Phillips monitors & Ultrasound along with a spacious, well equipped OT that has an AHU of fifteen air exchanges as per international standards.We invite surgeons from Thane & adjacent areas to operate their high risk patients for which, HORIZON HOSPITAL will provide adequate post operative care.Last but not least, an honorary mention – Dr. Hrushikesh Vaidya, is a US trained and qualified Critical Care Consultant and the Medical Director of Horizon Hospital. He has a fellowship in Pulmonary & Critical Care Medicine at Little Rock, Arkansas & has worked as a Consultant Intensivist in Hays Medical Centre, Kansas for a period of four years.At Horizon, we believe in spontaneity, excellence and warmest services.

My mother had health issue so went to hospital. Consultation was very good with the doctor. I can definitely recommend the doctor to my family or friends. Medicine was suggested by the doctor. Blood test, scanning and Bronchoscopy, biopsy was done. Till biopsy, they have done a fantabulous and grateful job. There was waiting time in the hospital for getting admitted. After consultation, they told to admit patient. My mom had breathing problem. We too had general consultation with local doctor and he suggested to do CT scan. He found something suspicious and later he told to do biopsy and initially Bronchoscopy as we get to know everything. He informed everything clearly and he told to get my mom admitted. Doctor was very friendly, very calm and knowledgeable by looking all history of patient. We later consulted an oncologist. We got result of biopsy after 7 days. Biopsy was not an easy procedure as a needle would be inserted. Bronchoscopy would be preferable. Patient care is top priority for them, they are not behind money. Hospitality was good. I am totally satisfied with consultation. I met Dr. Hrushikesh U. Vaidya for first time. He is best in talking with patient and we are happy to get such good doctor. Reviews in practo gave me confidence and experience was awesome.

I had health issue so went to hospital. ****** *** ****. I can definitely recommend doctor to my family or friends. I am satisfied with the explanation given. Medicine was prescribed by the doctor. MRI was suggested to do after 15 days. I am good now. There was no waiting time in the hospital. Hospitality was good.

I had been to hospital and consulted the doctor for neurological issue. ********* *** **** ** *** ******* I can recommend doctor to my family or friends. Medicine was prescribed by the doctor. Medical test like MRI was done. I am on medication. There was no waiting time in the hospital. Staff were very cooperative. Doctor was also listening to my problem. Doctor was up to point.

I had been to hospital and it was for health issue. ****** *** ****. I would like to recommend this doctor to other people if anyone asks. Doctor told me to come again in February month and medicines were not prescribed. I had been to doctor to do bronchoscopy. Doctor told me to wait and do it after 2-3 months. There was no waiting time in the hospital. Doctor was friendly. Hospitality was good but no space to sit in hospital.

Show all stories(43)
Report an Error