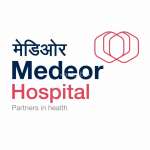 Wheelchair accessibility available
Patient Stories for Medeor Hospital
These are patient’s opinions and do not necessarily reflect the doctor’s medical capabilities. Read more
85 results
Sort By :
Most Helpful
A
Aditi (Verified)
In-clinic
2 years ago

I would definitively recommend to visit her for any gynecological problems...

dr. bhagvat is very friendly and cooperative. he listens very carefully and response in odd hours too....very satisfied with his treatment ....will recommend him to anyone with any psychological problem

It should be noted that a surgery in case of hemmoroid is the last resort and it should be only done when other measures have failed and the patient's condition has become critical. Also a surgery is not a permanenet solution to this condition and the chances of recurrence of hemmoroid or piles is very common.

I then thought of taking a second opinion from a friend who is a student of MS, he straight away asked me to avoid the surgery and consult another doctor.

Upon consulting a second doctor with a different hospital, I had to undergo a seried of blood-tests, urine test, ultrasound and a sigmoidoscopy. Since all other test results were normal, the sigmoidoscopy had confirmed that I had internal hemmoroids. But the test showed that my hemmoroid was of Grade 1 and not between Grade 2-3 like what Dr Vinay Shaw said.

The doctor at the second hospital did not advise me to undergo any surgery. He just performed a sclerotherapy which is injecting a chemical into the piles to shrink the inflammation. Also he advised me make some dietry and lifestyle changes.

I would not recommend Dr Shaw to anybody because he is an ignorant professional and just focusses on financial gains by performing surgeries. He should inform the patients about possible alternatives and not sent them directly to the operation theater.

I am 100% satisfied in his treatment attitude. I am recomend to all.

The doctor didn’t ask the problem, *** **** **** * **** *** expected to tell all the symptoms amd everything by the patient herself regarding the problem faced .. she didn’t bothered to see the affected area and no explanation of the problem was given, she just wrote the medicine and said- get the ultrasound done and show it to me .

Dr. Shalini Chaudhry replied
I dnt understand your concern dear . I mean who else but the patient herself is supposed to tell the symptoms to the doctor. I explained you in detail about your disease and prescribed the necessary medicines plus the ultrasound which was really required.
R
Renuka tripathi (Verified)
In-clinic
6 years ago

I went to Rockland hospital Dwarka to consult gynecologist for my first pregnancy. I had no clue which doctor to consult to. Luckily Dr Yogita Parashar was available in OPD. On very first day I decided that I will not go anywhere else. My decision was right. I gave birth to my baby, weighing 3.12 kg, normal delivery. I strongly recommend Dr Yogita Parashar on the basis of my personal experience.

• She supervised all 9 months of pregnancy, no problem crept in. she assured me of normal delivery.

• Keeping in view my height (5’2”) a Baby weighing 2.8 kg would have been ideal. Weight of my baby was 3.12 kg during birth. My doctor had to sweat a lot but she kept her word. As per the trend, had there been some other Doctor she might have gone for operation.

• Dr Yogita is a very soft spoken and cheerful doctor, smiling all the time. She is a patient listener and handles patient carefully with very nice attitude.

• Since this was first pregnancy, I had no previous experience of any gynecologist but I tell you that Dr Yogita is not only a good doctor but a good human being as well. She is committed to what she says.

• I see crowd increasing day by day on her OPD at Rockland. This approves of professional efficiency.